Back in the spring of 2017, I was contacted by clients who wanted to do some work on their backyard.

They had lived in this lovely house for approximately 30 years if I’m not mistaken and had wanted to work on the back area for some time.

The homeowners were a lovely couple who were a pleasure to work with and who took an active part in following along with the design process.

They made choices on hard and soft scapes and were present and available through the months of installation and implementation of the design.

Little did we know when we first started that there would be some delays that would make this project as the title describes, a work in progress. We met for the first time back at the end April of 2017 to look at the site and talk about their thoughts on the project.

A rough concept plan was on paper by June of 2017 but there was still much to work on the design and many decisions to be made.

By the end of August, we were ready with the final plan with hardscape, plant lists and a rough budget for the project. But now as I said, it was the end of August and that meant it was getting a bit too late to start as we still had to get on the schedule of the contractor who would be implementing the project.

By October, we were finally coming to grips with the fact that we wouldn’t be putting a shovel in the ground until next spring.

Over the winter we solidified the materials for hardscapes.

Stone for the walls and pavers for the patios along with a fountain and a fire pit. Finally, with the coming of spring, we were ready to go but Mother Nature was not.

We were held back again and again, delayed by bad weather and a lot of rain. At long last on June 13th, 2018 the shovel finally went into the ground, more than a year after our first meeting. Patience, oh yes, we have much… 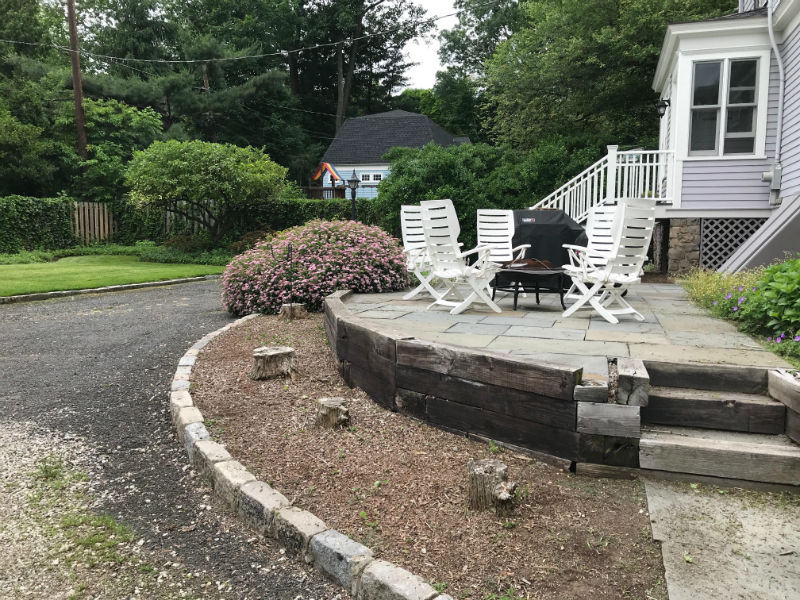 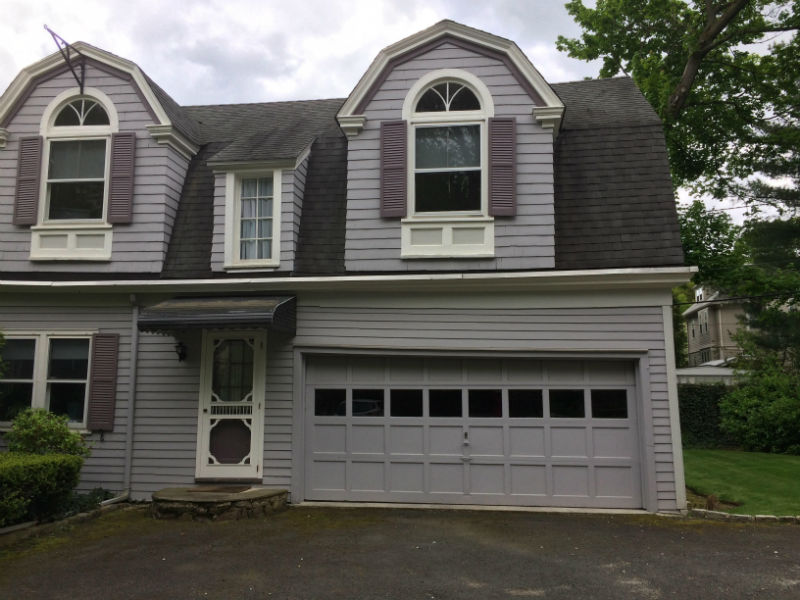 Here you can see the original photos taken in the spring of 2017. It was a large backyard with a patio located at the bottom of a set of steps just outside the kitchen door and a grassy area beyond the patio.

The problem was that those two parts of the backyard were split in half by the driveway which led to the garage, making each area feel a bit small and bordered by asphalt, which is not the prettiest sight. The driveway that led to the garages were part of a lovely carriage house in bad repair and not very nice to look at.

The carriage house, while lovely, felt like another separate area which could be better integrated into the design. Finally, just below the patio area was a planting bed retained by railroad ties and the remains of some old tree stumps that had come down in previous storms.

Around the corner of the house there was another area which I called “The Secret Garden”. It was across the driveway from the carriage house and ran along the side of the main house. It was divided into four squares bordered by blue stones with brick paths which had become overgrown over the years.

There was a raised bed in this area that was also retained with railroad ties. In that upper bed were two very old and very large Rhododendrons. The potential for this space was immediately clear to me but it would take some changes and some new life breathed back into it. 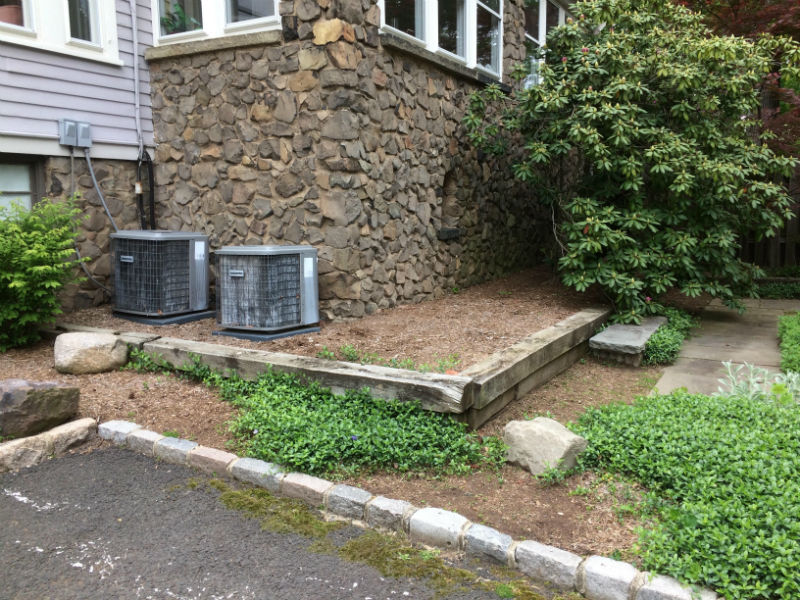 This photos shows the secret garden with the large Rhodies 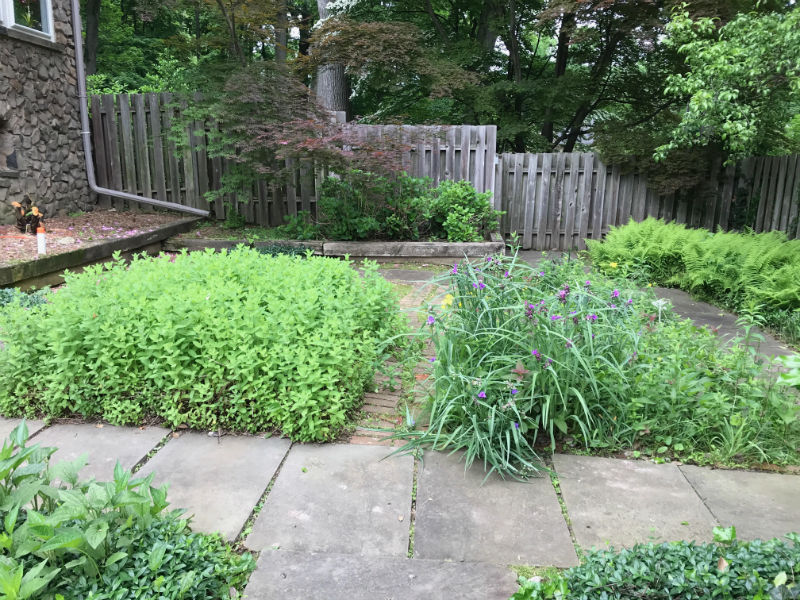 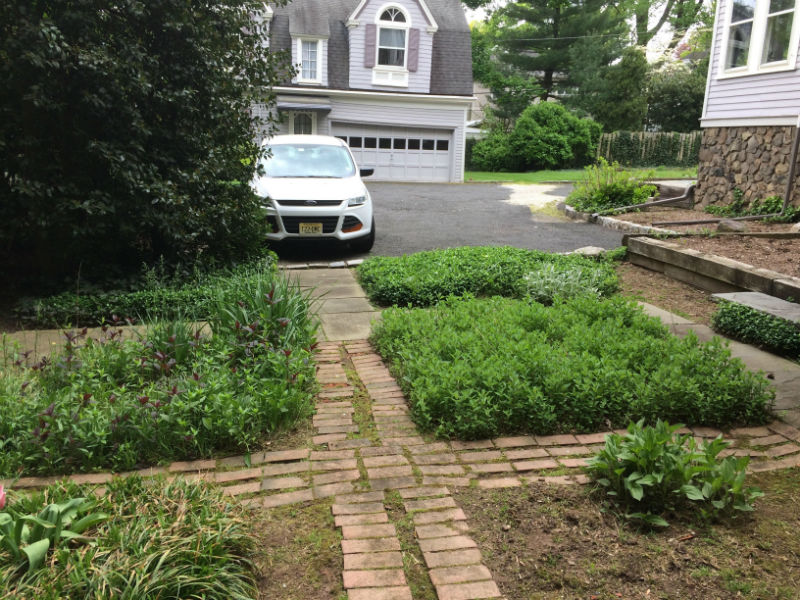 I realized early on that the tricky part of the design was not seeing the site as four separate areas: the patio, the lawn, the secret garden and the carriage house all connected by the driveway. But instead to somehow connect the “rooms” into a cohesive design. 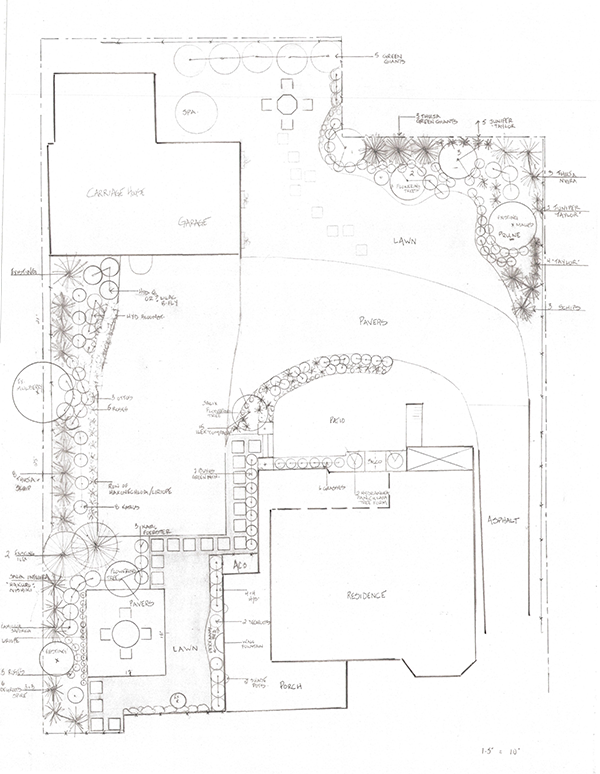 My thought was to connect the spaces in a couple of ways.

By using similar hardscape materials and plantings, I could achieve a more cohesive look. I thought one of the most important aspects of the design would be to remove as much of the asphalt as the budget would allow.

This would enable me to change the appearance from driveway to more of a continuation of patio to lawn and garden. To achieve that end, we removed an area of blacktop and replaced it with pavers. The same pavers were used in the new patio area of the secret garden to tie the two areas together. We also used pathways between the “rooms” to create a connection to all parts of the garden and patios.

First up, of course, was demolition and what a job it was. First, all the plants, weeds and all signs of greenery were dug and removed. Then the old railroad tie walls in the patio bed and in the secret garden, gone. The result looked a bit like the demilitarized war zone. 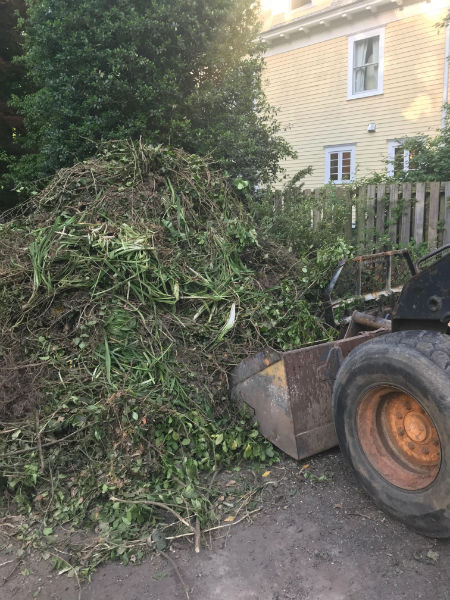 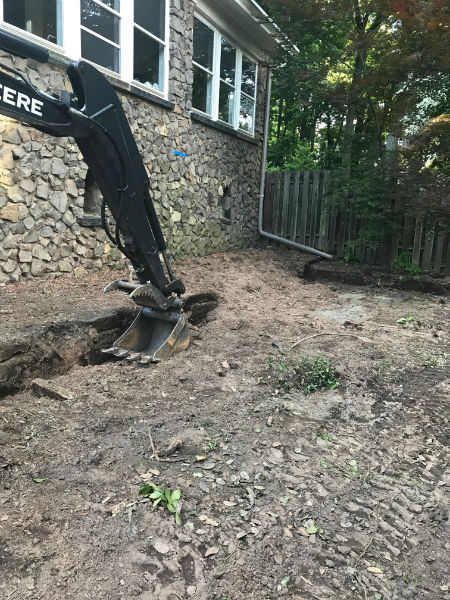 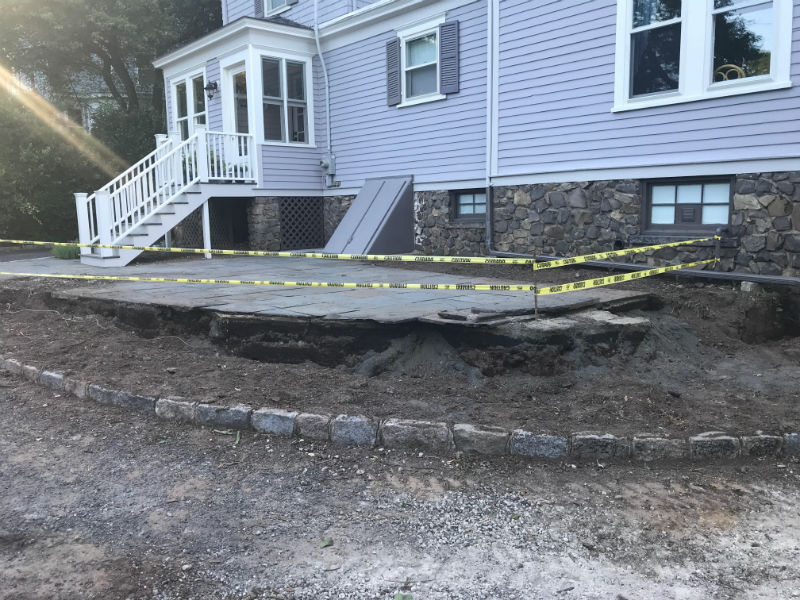 Once all that was cleared away, the crew got to working on the stone walls.

It has to be said that the craftsmanship and the patience of these men are admirable. They worked slowly and arduously finding and refining just the right size stone to fit into one another to make the puzzle pieces work together.

The stones were large and heavy but they worked and they worked until they turned out something that was beautiful. It was slow but sure. It should be said that this was a very hot, humid and rainy summer, but still they carried on.

On the worst days, they constructed a makeshift canopy to stay out of the sun. They worked and never complained and in the end what they achieved were two beautiful retaining walls. 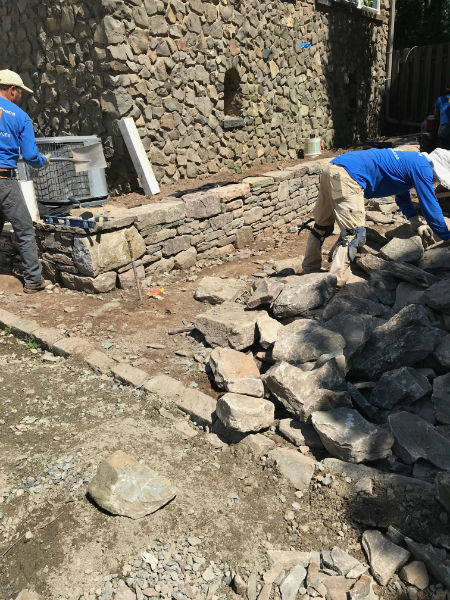 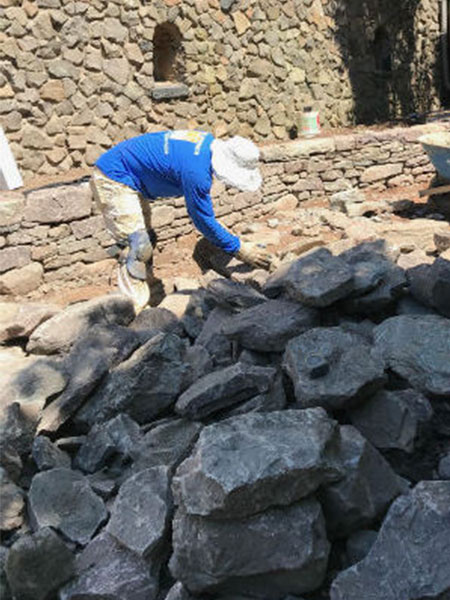 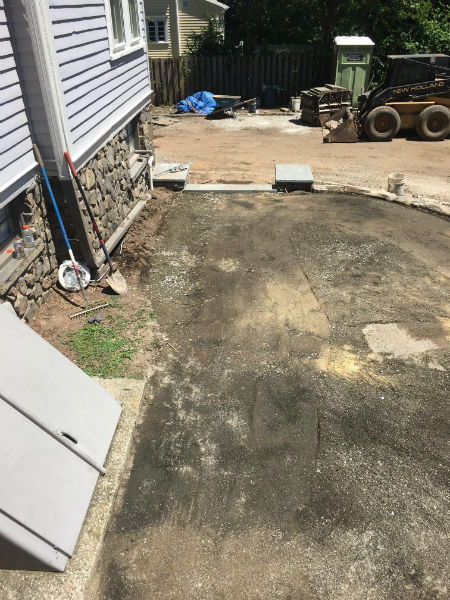 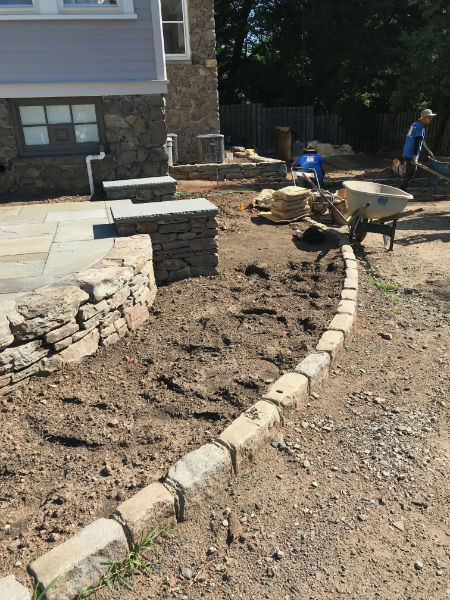 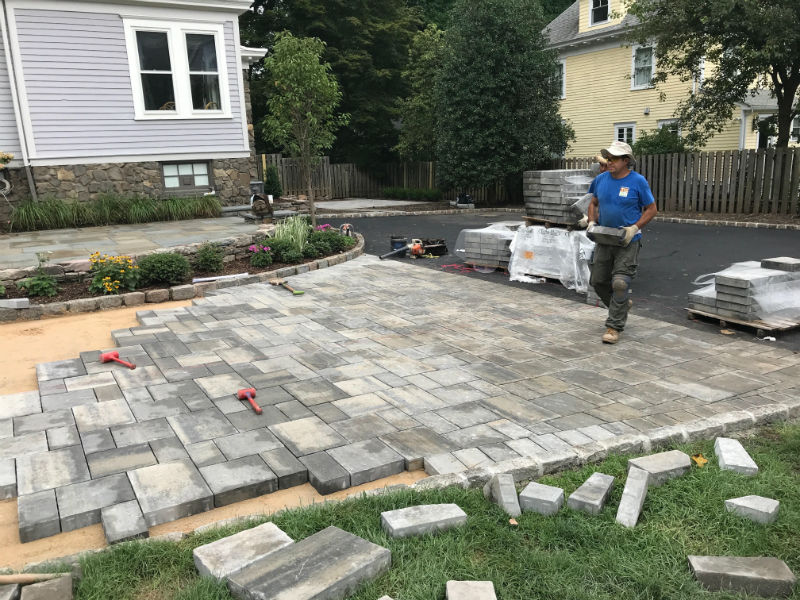 The patio and pathway in the secret garden

And so it went on and on day after day in extreme heat.

The walls were finished, the patios were laid, the fountain was installed. A hot tub was added to the design and installed and a fire pit was bought and ready to go in. All this was done in extreme heat.

There were days when it was so hot that I thought my face was melting. There were delays due to downpours of rain so hard it was not to be believed. But little by little we got there and the result is something we are all proud of.

The side door and garden area of the carriage house, what to do? 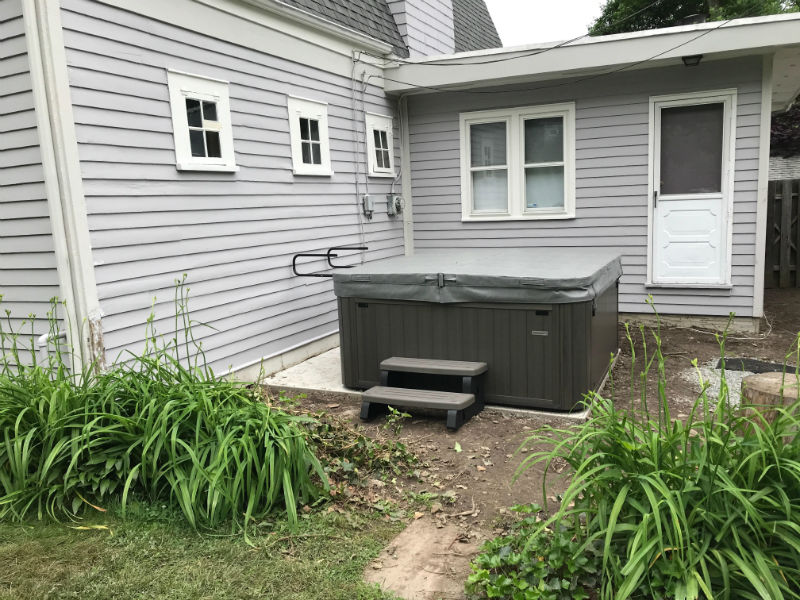 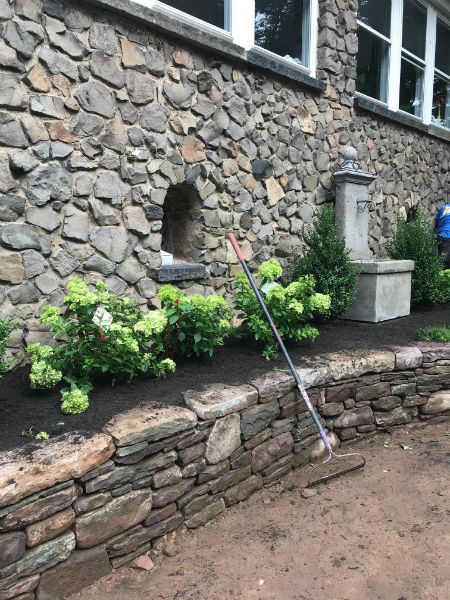 The fountain is installed (left) And now for the plants… (right)

Finally, at long last, all the hardscape was done and it was time for the plants, my favorite part. Two truckloads of plants arrive, are placed and planted, irrigation follows, the sod goes down and at last, the driveway areas that will remain as blacktop get new asphalt.

Last but not least, the furniture arrives, the trellises are put up, air conditioners screened and the fire pit is put into place. At long last, it is done, for this season at least, and it is beautiful. 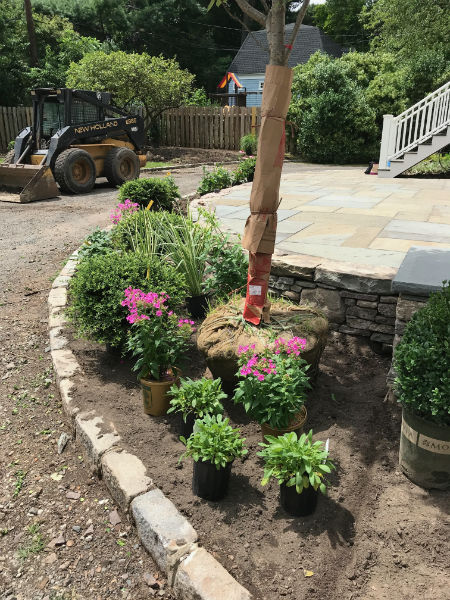 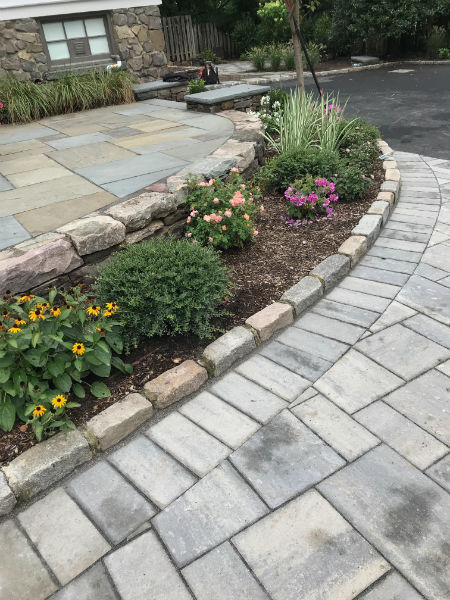 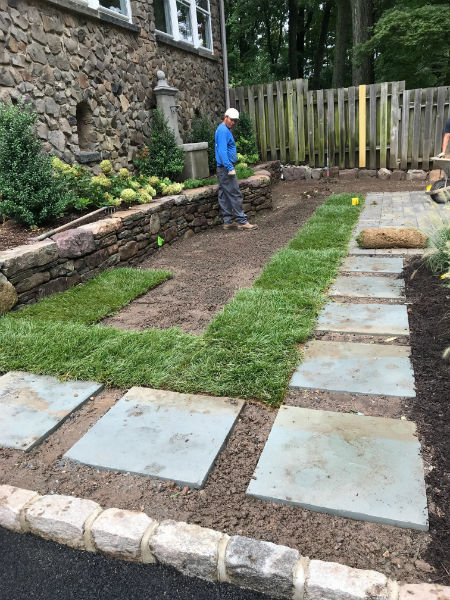 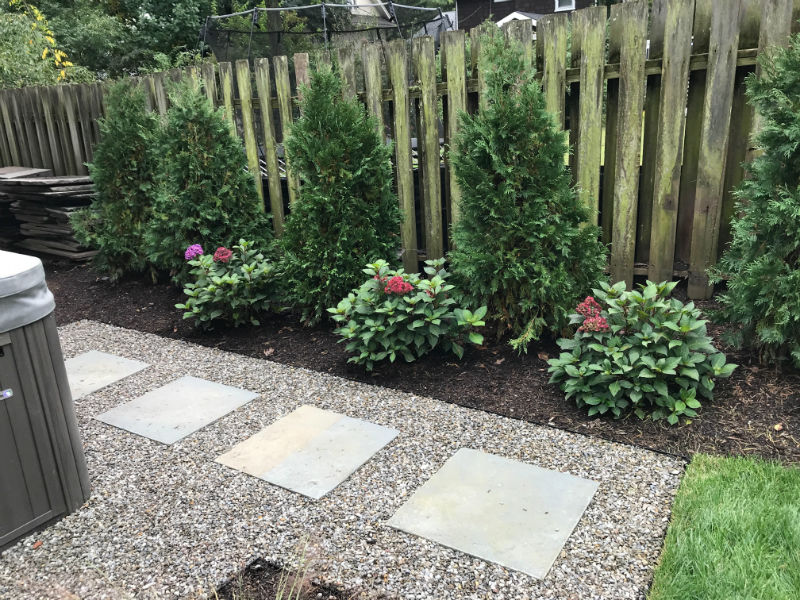 In spring we will add some spring blooming perennials, some annuals and generally fill in as needed with plants and accessories. Maybe some large bowl planters on the piers of the steps, maybe some lights and definitely a lot of enjoyment for the homeowners for many years to come. 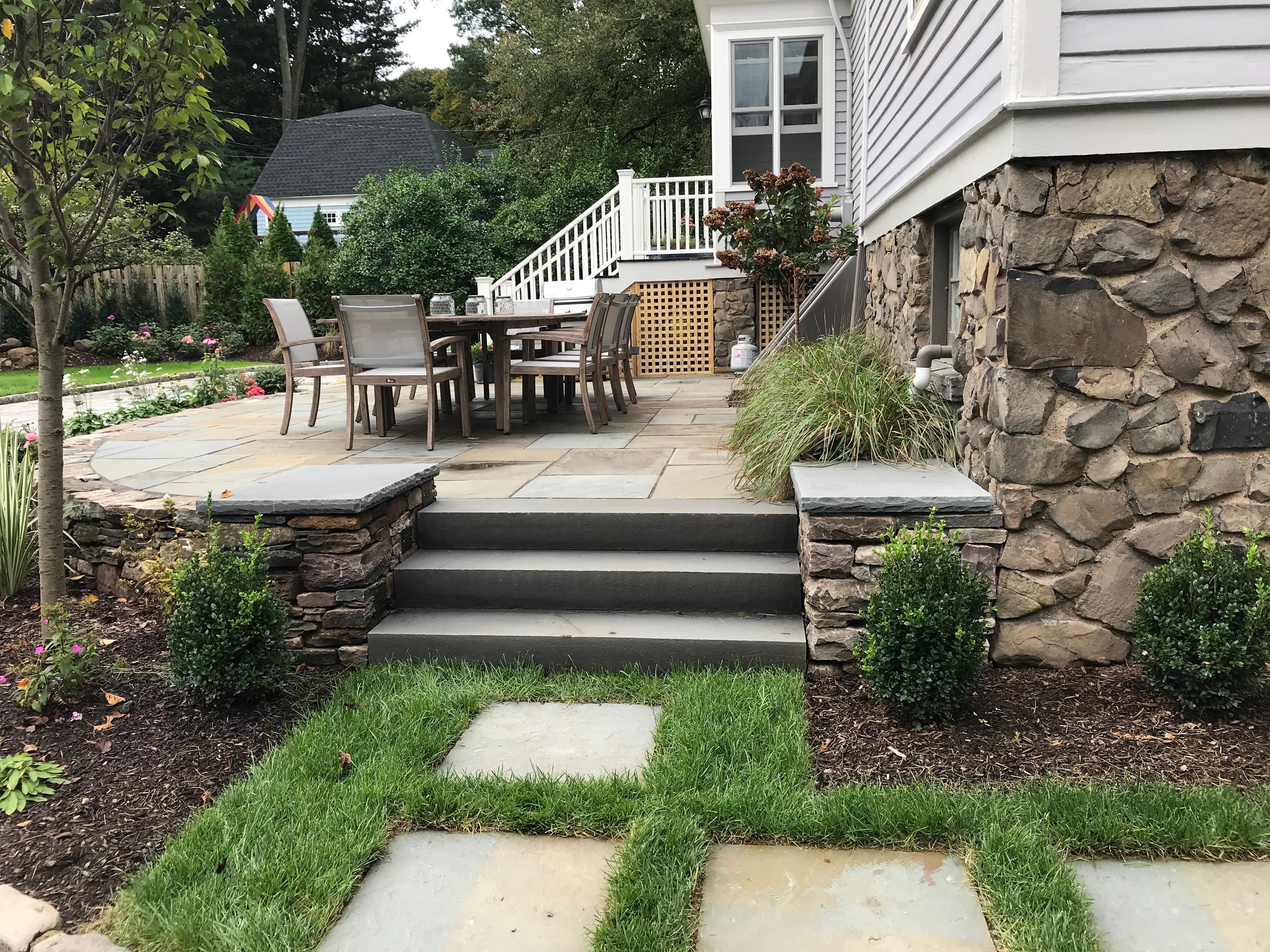 But for now it is time to rest, let the perennials go dormant and wait for spring to come again.