The first order of business was clearing out the back of the property, turning and amending the soil and getting it ready for planting. There had been a number of weed trees, overgrown shrubs and two huge thickets of forsythia that had been back there and untouched for years. 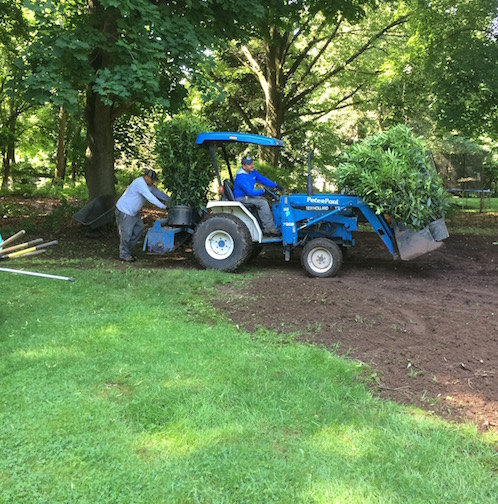 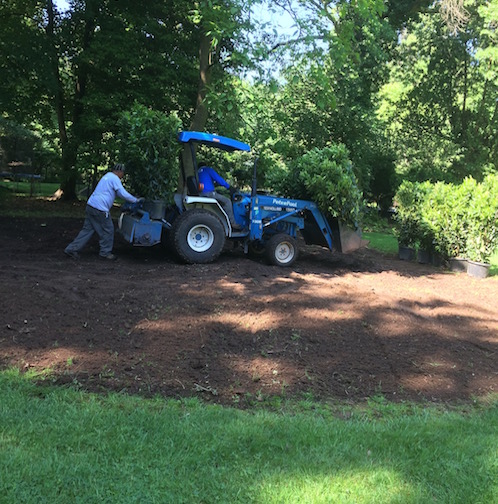 The area was cleared last fall.

A number of trees were taken down; the brush and shrubs were taken out. Then, some preliminary irrigation was put in and, most importantly, the area was completely fenced off with deer fencing around three sides of the backyard and decorative gates and pillars off of the front of the house. That’s where it was left last fall when we decided to pack it in until spring. Phase I done.

Day one was on Thursday, the 1st of June, when, as mentioned above, the soil was cleared and turned and made ready for the new plantings. While the crew was working in the back, I began to dig out the plants in front that never should have been planted there. The digging wasn’t too bad; the soil was soft and moist but I wanted to do it myself so that it would be a lesson I would never forget. If a plant calls for sun or even part sun, planting it in the shade will never do. 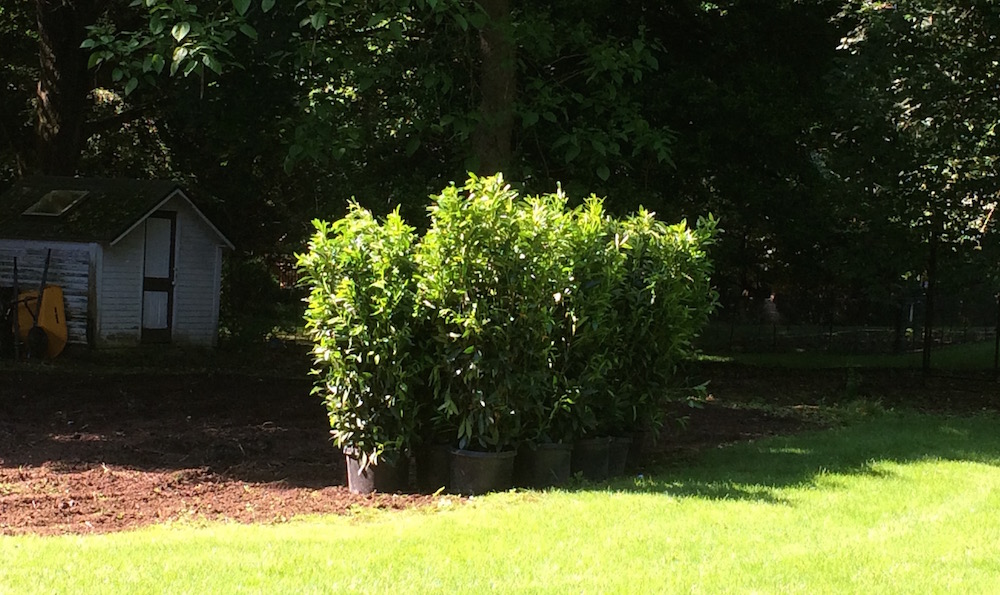 In the midst of all of this, the delivery showed up from the nursery and all hands were on deck to unload four trees, 44 large evergreen shrubs, 22 small shrubs and 40 grasses. 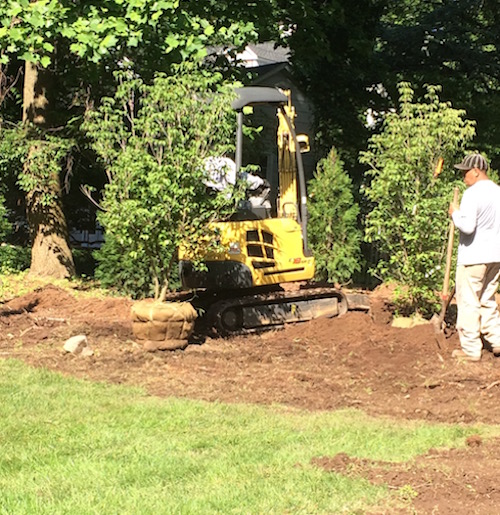 Once all the prep work was complete, we began placing the plants.

While the plan is drawn onto paper first, sometimes in the field, the reality turns out a little different than the drawing. Things are moved and shifted a bit and finally, once we’re satisfied, the digging can begin.

Day two, Friday the 2nd, was spent doing just that. I can’t say enough for the crew of men I work with. They are kind, funny and hardworking and never have a complaint about the tasks or how heavy or difficult anything may be. As one of the guys said to me when I apologized for asking him to move a tree with a rather large root ball again, “No worry. That’s the job!”

By the end of day two, all of the above was planted and watered in and the bed lines were drawn and cut. 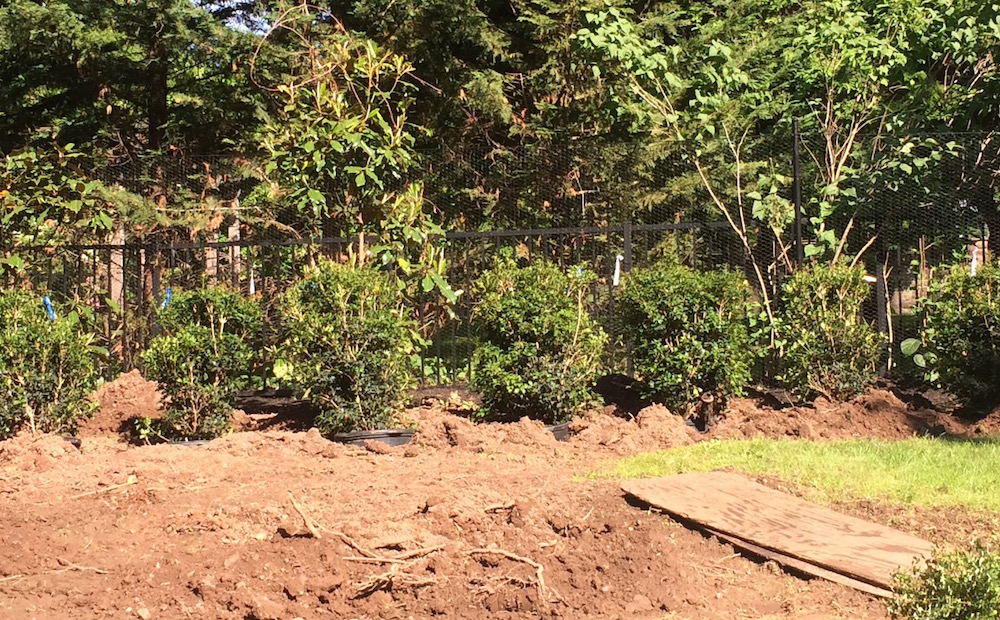 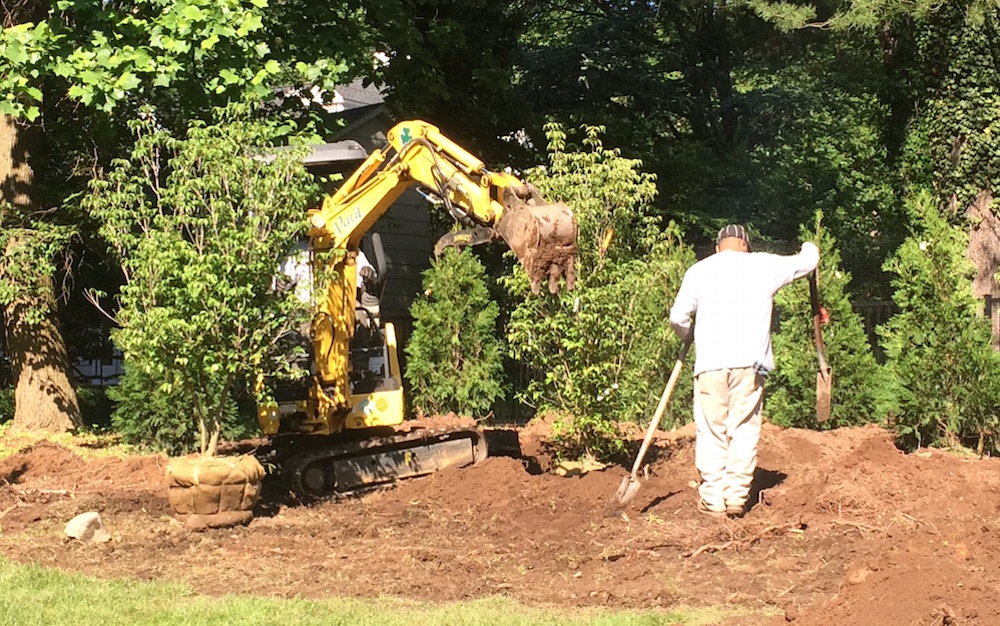 The “bones” are in and now we can move onto Phase III which will be the “pretty things” like the roses, the hydrangea, the butterfly bushes and, of course, the perennials and annuals. Next week, I’ll place the order for the “pretty things” and we’ll work on getting those sited and planted and all that will remain will be the final icing on the cake, better known as mulch.